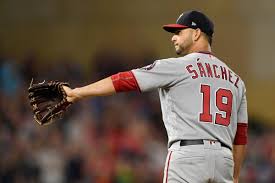 Searching for similar edges they found for their beginning pitchers in the division arrangement, the Cardinals are going with Miles Mikolas for Game 1 of the National League Championship Series and scoring two home beginnings for Adam Wainwright in the best-of-seven arrangement against the Washington Nationals.

That spots Jack Flaherty as the starter for Game 3, when the arrangement movements to Washington.

Beginning pitcher Dakota Hudson, who won 16 games in the customary season, will be accessible in help for the initial couple of games.

Supervisor Mike Shildt started his public interview with statements of regret for his bright language during a private discourse to the group that was shared live through web based life by freshman Randy Arozarena.

Shildt focused on that the language he utilized was grievous, however he would not apologize for his “enthusiasm” for the group.

“The clubhouse is a sanctuary that is very sacred,” Shildt said before taking questions Thursday at Busch Stadium. “It’s a private opportunity for us to be able to enjoy and celebrate and yesterday I got a great opportunity to have a moment with our team that is private – should have been private – and make sure they knew how proud (I am) of the accomplishments.”

“I apologize if my language offended anyone. It is not something I like to represent. It’s not to be excused. I will say that I’m flawed. I have my moments. I grew up in a clubhouse and one of the crosses I bear is my language. I’ve done a nice job over the many years of curbing that. Trying to represent always myself and this organization in a positive light with class and dignity. It’s regretful that that was able to get out.”

They immediately said that the new kid on the block was not to fault.

“As far as Randy, completely give Randy grace for it,” Shildt said. “He was just excited. He’s a great kid with a great heart.”

Game 2 is set for 3:08 p.m. Saturday at Busch. All NLCS games will be communicated on TBS.