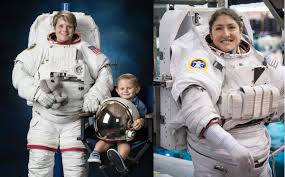 (CNN)After the primary all-female spacewalk was rejected in March, NASA has now planned another endeavor with space explorers Christina Koch and Jessica Meir for October 21.

The declaration was made Friday during a preparation by the organization reviewing 10 up and coming spacewalks by space travelers on the International Space Station.

For the expected spacewalk in March, Koch would have been combined with space explorer Anne McClain, who has since come back to Earth. In March, NASA refered to spacesuit accessibility as the explanation behind rejecting the walk. McClain herself settled on the choice and the groups bolstered her, Koch said.

“We do our best to anticipate the spacesuit sizes that each astronaut will need, based on the spacesuit size they wore in training on the ground, and in some cases (including Anne McClain’s) astronauts train in multiple sizes,” Brandi Dean with NASA’s open undertakings office told CNN in March. “However, individuals’ sizing needs may change when they are on orbit, in response to the changes living in microgravity can bring about in a body. In addition, no one training environment can fully simulate performing a spacewalk in microgravity, and an individual may find that their sizing preferences change in space.”

Koch led a spacewalk alongside individual space traveler Nick Hague rather than McClain at the time.

At the point when gotten some information about spacesuit accessibility this time around, Koch said there are as of now two medium spacesuits ready. After the primary all-female arrangement was moved, Koch designed the second spacesuit theirself utilizing what was accessible ready.

People and Meir have both prepared in medium-sized suits throughout the previous six years.

Koch’s strategic outperform that of Peggy Whitson, who burned through 288 back to back days in space, and end up barely short of the longest single spaceflight by a NASA space explorer: 340 days, set by Scott Kelly.

Generally, there will be 10 spacewalks throughout the following three months, “a cadence that has not been experienced since assembly of the space station was completed in 2011,” as per a tweet by NASA. The tweet additionally demonstrated a picture of pairings for the forthcoming spacewalks.